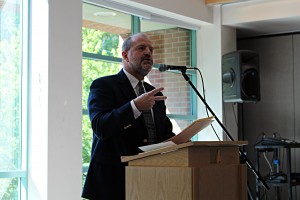 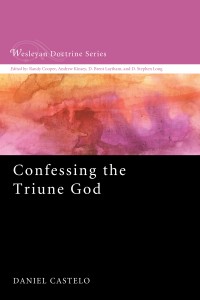 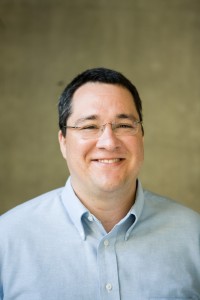 After Dr. Doug Strong asked me to do this book review and I knew the book was on the way, I decided to wait and be surprised. I knew the title and thought, “It has to be two volumes, maybe a three volume set, something like Schleiermacher’s “The Christian Faith.” I mean, it’s dealing with the trinity, for heaven’s sake. Okay maybe not quite that large but two volumes anyway or at least 700 pages, academically focused…I mean come on…it’s the trinity, written by an academician. Look at the title: “The Wesleyan Doctrine Series” – and oh my, four editors, and then the title, “Confessing the Triune God.” What would you think? Then the package arrived. It was way too light and I wasn’t sure there was even a book inside. I opened it and there it was. On the one hand I was relieved but…really? It’s too small, 127 pages, and diminutive. I thought there was no way; no way anyone could possibly do adequate work around the trinity in 127 small pages. Then I began to read.

Among the things I most appreciated about the book, beyond its size, was that Dr. Daniel Castelo wrote the book with two personal backgrounds and two populations in mind. The backgrounds were as a pastor first, with the second as an academician and theologian. The two audiences were first, beginning theological students and the second, “devoted curious church folk.” I will share that 90% of the book would engage both populations equally well. Yet, having spent twelve years traveling with PhD level academicians I knew that there is a tendency among some academics to, when they get uncomfortable, a little overstressed, up against deadlines, or even overtired, can and often do wax into a different language, often only understood by other academicians. That felt that happened twice in this short volume. I look forward to the conversation with Dr. Castelo about these two places. Both were places where even my highly educated Bible study classes would have become frustrated and placed the book aside. The first was much of chapter four, an incredibly complex overview of the Trinity in Christian history. Like the fourth century, it sought to describe and identify definitions in a complex time. It became difficult to follow. The other place was later in the book where he talked of axioms, heuristic mechanisms, and the trinity forming the primordial basis for the economic trinity.” There are deep truths to both places but I wondered if there might have been a more accessible way to communicate the precepts particularly given the populations toward which he was focusing.

At the same time, had anyone in those Bible study classes put the book aside at chapter four they would have missed out on some of the most profound, beautiful and easy to follow descriptions relating to the Trinity I’ve ever read. What was written was consistently accessible, beautiful in language and description, with multiple schools of thought explored at every possible juncture. But Dr. Castelo didn’t stop there. I appreciated that, instead of just exploring possibilities, Dr. Castelo took stands, made assertions, and “took thou authority.” He took on the gender argument about Father, Son and Holy Spirit and was able to articulate both the need for, and reasons for deeper exploration about gender, history, contextuality and other possibilities. He took on what he called “faulty God talk” and helped create a more appropriate language for so many of these complex ideas. Regarding Wesley, I had only one criticism. He spent pages examining Wesley’s ideas of grace with a particular focus on justifying and sanctifying grace, on full sanctification and even the idea of what “moving on to perfection” really meant. As a Wesleyan, I deeply appreciated that section. But I thought an opportunity was missed to clearly state that God’s prevenient grace was available to all, not just those seeking to become the faithful. Again, certainly worthy of further conversation. One of my favorite sections was the description of “transformation as possibility” within the trinity. It defines the Trinity’s role in potential transformation of individuals and the world all in wonderful, thoughtful even poignant ways.

This book should be a must-read for both identified populations and many others. Part of the genius of the book is its size. It deals with so many of the questions I’ve heard and sought inadequately to answer over the years on the whole concept of God in three persons. From one who has studied and appreciated John Wesley, Dr. Castelo sprinkled in just enough to make me feel at home. He made the trinity come alive for me and I will be utilizing this as a resource, if not the resource, for an upcoming study.

The book closes with these words from Charles Wesley, appropriate to close this short review:

“Three persons equally divine
We magnify and love:
And both the quires erelong shall join
To sing thy praise above.
Hail holy, holy, holy Lord,
Our heavenly song shall be
Supreme, essential One adored
in co-eternal three.”

That verse describes it all, what was accomplished so beautifully by Dr. Daniel Castelo in “Confessing the Triune God.” Thank you for this gift and for this opportunity to review the book.