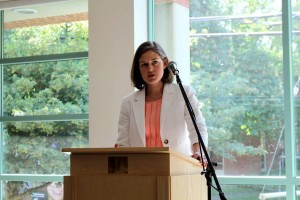 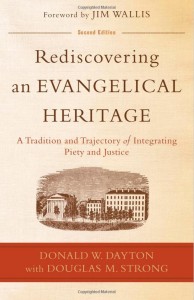 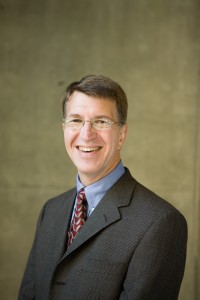 One of the authors.

Dr. Strong’s book, “Rediscovering an Evangelical Heritage,” is really a book within a book. It is a re-publication of the Donald Dayton essays originally published in what is now Sojourners Magazine, compiled into a book in 1976 and updated in 1988, with new commentary in 2014 from Dr. Strong relating it to 21st-century Christians. The original text is essentially a history of 19th- and early 20th-century evangelicalism, a movement largely started by revivalists like Charles Finney. These early evangelicals were grounded in Scripture and dedicated to the conversion of souls. But they didn’t stop there. Instead, they led major – often radical – social reform movements, work that today we would call “social justice.” They fought against slavery, championed women’s rights, were dedicated to the poor and outcast, opposed war, worked for peace, and generally showed that to have a conversion of heart meant to have a conversion of life, that the church must lead society in taking on the moral – not just theological – issues of the day. Dayton helps us understand that while these Christians were originally thought to be revolutionaries and insurrectionists, the clarity of retrospect shows us that instead, they were simply exercising a responsible social witness, following the call of the gospel (1).

So what happened? How did the very term “evangelical” come to refer today largely to a group of people so dedicated to right belief, to their own piety, and so resistant to wider social movements and causes of justice often associated with progressive politics? Dayton argued in 1976 that there are several sociological, historical, and even theological reasons that evangelicalism shifted away from social reform. But Dr. Strong encourages us to look at this history and take it up as our own. He writes in the conclusion, “Dayton provided a historical grounding for an inspiring narrative of American Christianity that stressed the biblically based integration of revivalism with social-reform activism,” pointing to “a faith-based, justice-oriented praxis as the best agenda and trajectory for evangelicalism’s future” (2). Strong argues that we have to give up our understanding of evangelicalism as a product of 1980’s televangelists or the Religious Right, and reclaim the history Dayton tells of how evangelicalism really began in this country, moving ourselves toward a more holistic faith, in hope of a holistic redemption.

And I think he’s right. Today’s young people – and increasingly older people – have little interest in doctrinal purity if it is not accompanied by Spirit-led piety. New Christians today are looking for that integration of their commitment to Jesus with their social activism. Their hearts are open not only to personal conversion and redemption of sin, but to the transformation of whole communities through social justice that is grounded in Scripture.

So if today’s evangelicals want to survive, we must embrace this integration, take our cues not from the last 50 years of history, but from 150 years before that, when evangelicals rallied around abolitionism, women’s liberation, and economic equality, dedicating ourselves to similar issues today of race relations, women’s inequality, heterosexism, and vast economic disparity.

But there’s something more at stake than the survival of evangelicalism as a movement. To me, this re-integration is a matter of urgency for the sake of the kingdom of God. While progressive mainline denominations often work for social justice without personal piety, without a reliance on the Holy Spirit – justice for the sake of justice with no real hope for the world; and evangelicals tend to their own souls while ignoring many of the world’s problems, non-Christians are rolling their eyes at this stark divide and running the other direction. Neither of these movements will affect real change without the other, and this integration – a Charles Finney, 19th-century integration – of evangelical fervor and social reform, just might be the one chance we have at uniting Christians in America and beyond, not for the sustaining of institutions, but for the transformation of the world.