There has been a resurgence in popularity for Ayn Rand in the last few years.  Certainly her books were something of discussion 50 years ago while she is still alive and writing, but America, of late, has begun a new interest in Rand.  Ayn Rand is known for her philosophy of Objectivism which holds both selfishness and Capitalism as pillars. This new interest, particularly for her novel Atlas Shrugged, is likely due to her unwavering belief in Capitalism, which today seems to be dying.

Without having to espouse to her philosophy, Rand’s novels can and should be enjoyed.  The Fountainhead and Atlas Shrugged are both stories where the protagonist struggles to be the best at his or her profession even though the world continues to encourage mediocrity.  Rand fills her novels with villains who are lazy philanthropists and heroes who are  completly willing to break all social norms for what they believe to be correct. 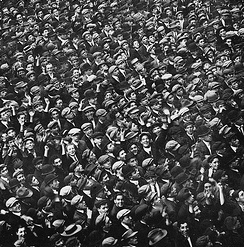 Anthem, written in 1938 for Europe but adapted for America in 1946, is quite different when compared to Rand’s other novels. While Rand’s typical depth of character is minimized, the novella, in around 100 pages, begins to explore Rand’s philosophical notions from the stage of a future dystopia.  The society that Rand sets up is one so completely focused on the cooperate good that freedom, choice, and individualism no longer exist.  This is concretely seen in the vocabulary of the citizens as the word “I” has been banned as any who rediscover the word are killed as heretics.  Without a first person singular everyone must speak in the plural.  There is no I in Rand’s futuristic dystopia, only we. 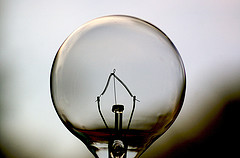 Equality 7-2521 ends up breaking all the rules, he continues his scientific interest alone in a tunnel and eventually discovers the light bulb.  This is forbidden because it goes against the will of his brothers and any work done alone is understood as evil.  In addition, he falls in love committing the sin of being more fond of one of the members of society than another.  Eventually Equality 7-2521 runs away with his beloved to the Uncharted Forest, discovers the word I and vows to start a new society where each individual human can be free, have direction over his or her life and posses rights.

Rand frequently uses religious terminology (sin, damned, heretic, evil) in this book, almost setting up the cooperate society as a religious institution. Equality 7-2521, who changes his name to Prometheus, comes to believe in the evilness of “We.”

“For the word “We” must never be spoken, save by one’s choice and as a second thought.  This word must never be placed first within man’s soul, else it becomes a monster, the root of all the evils on earth, the root of man’s torture by men, and of an unspeakable lie.”

Instead of the tyrannical “we” as the source of religion, Rand shifts to the Ego.

“And now I see the face of god, and I raise this god over the earth, this god whom men have sought since men came into being, this god who will grant them joy and peace and pride.

This god, this one word:

Rand is correct that the idea of “we” can become a monster, however I do not see the Church as such a monster.  Luckily Christian churches, for the most part, let each individual assent to be a part of the we if he or she so chooses.  This assent, like the Trinity, does not remove all notion of difference for the sake of a homogeneous identity.  Neither of Rand’s futuristic portrayals are an accurate picture of the body of Christ.  We, as a church and as a people who have chosen to follow Christ, recognize that God is other than individual humans or a cooperate humanity.  Unfortunately Rand did not explore the tyranny that is “I.”  Being completely dominated  by the “We” is just as bad as the curved inwardness of compulsively giving into the “I.”  As the church we must continually live in the balance between being a “We” and being an “I.” Luckily for us we do believe that God is wholly, and Holy, Other as it is easy to fall in the belief that humanity is God or that the individual human is.