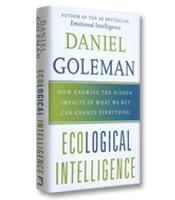 Ecological Intelligence: How Knowing the Hidden Impacts of What We Buy Can Change Everything, by Daniel Goleman (New York: Broadway Books, 2009. 288 pp)

As a psychologist, Daniel Goleman writes and lectures to students and working professionals on brain and behavioral sciences. Born in California in 1946, Goleman split his time as an undergraduate between Amherst College and the University of California at Berkeley, receiving a B.A. from Amherst in anthropology. Through a scholarship from the Ford Foundation, Goleman attended the clinical psychology program at Harvard and pursued doctoral research on meditation as an intervention in stress arousal. Goleman’s post-doctoral grant from the Social Science Research Council later became his first book, The Meditative Mind. Taking a job with Psychology Today, Goleman became interested in full-time writing, publishing articles with The New York Times and writing books, including the widely popular Emotional Intelligence. Goleman lives with his wife in Massachusetts.

Money, the most awkward subject in church. Some pastors decide to forgo any mention of it for fear of molding the sermon into a money grab; others discuss money constantly, reminding their parishioners of tithing as a duty to God. In both instances, the debate resides around the tithe, typically understood as a charitable contribution of 10% of all income.

Setting aside debates about whether a tithe ought to be the standard or a minimum, Christians all too often utilize the remaining funds in the marketplace without much thought about the biological, ecological, and social ramifications of their purchases.

Naturally, many Christian leaders would shy away from exerting control over a congregation’s finances. But I am not proposing that a pastor give his or her flock a list of what to buy. Instead, I believe it is important that Christians be reminded that what they purchase counts. Each item in the shopping cart represents a vote for that product.

Whether or not we want to admit it, Christians buy products from some pretty nasty companies. Luckily, though, many virtuous companies do exist — companies that are selling good products for health, society, and the globe that have been produced in humane ways. If Christians consider purchasing in this manner, it is possible that they can add further change to the world in addition to charitable donations.

With these ideas in mind, Daniel Goleman’s book Ecological Intelligence discusses the importance of knowing the effects concerning the things we buy. If you realized that buying the cheaper pair of shoes not only meant that you continue to promote child slavery but also that you are wearing a product that leaks toxic chemicals into the air, wouldn’t you think twice about purchasing the product?

Of course, Ecological Intelligence focuses primarily on the environmental side effects of the things we buy. Yet Goleman also expands his spotlight to uncover the hidden impacts on health, the environment, and society as a whole.

Goleman suggests that consumers demand radical transparency in the market place. As it stands, a disconnect lies between consumer and producer. We don’t know exactly where food, clothing, and toys come from. With subsidies imparted through big-business lobbying, the open market is not actually open. Thus, business finds means by which to hide certain health, environmental, and societal costs.

Radical transparency, on the other hand, suggests that business lifts the veil off its operations and supply chain. Under this scenario, a consumer is capable of rationally deciding the best product, based on open information. Goleman adds,

The current cultural climate around the globe offers a ripe scenario for this sort of transparency. More specifically, social networking allows almost instantaneous communication between extensive populations. If a business ethically falters in this environment, word will spread quickly. Moreover, websites such as www.goodguide.com supply customers with a smart-phone application, providing power in the hands of consumers to obtain a better sense of companies and products.

It seems to me that most Christians would seek to do good in the world when presented an opportunity to do so. Ecological Intelligence offers practical ways in which people can navigate the health, environmental, and societal factors of purchasing products. The Christian Church is a beacon for the poor and disinherited. Many Christians give generously to charity and mission organizations. But we can do so much more! Our groceries, clothing suppliers, and houses give us further opportunities to choose the best products for our own health, the environment, and society.