Book Review–Game of Thrones (A Song of Ice and Fire: Book 1) 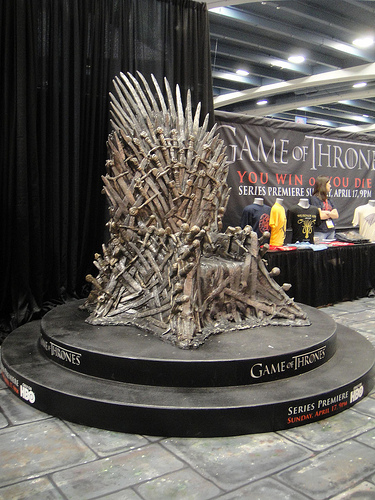 Game of Thrones has be receiving increased popularity over the last several months as George R.R. Martin’s series of novels (the first five are currently published) are being made into an HBO series. While the HBO series seems to be greatly exaggerating the number of scenes including sex, nudity and incest, it appears fairly accurate in terms of fighting, drinking and foul language.  Religion plays an interesting role in the book as some, the Starks, pray to the old gods, while others have abandoned them for new, more relatable, and less creepy gods.  The book itself is compelling, although very light on the fantasy particularly compared to The Lord of the Rings Trilogy or The Kingkiller Chronicle.

Instead of having a single protagonist there are eight point of view (POV) characters in the novel, which leads to a multilayered, though at times a frustrating read as storylines are picked up and abandoned for a time every chapter.  The following is a short look at each of the POV characters and their role in the novel.

Eddard “Ned” Stark had a lovely life with his wife, Catelyn, and children (Robb age 14, Jon Snow also 14, Sansa age 12, Arya age 8, Bran age 6, Rickton age 3) at the Stark family castle called Winterfell.  That is until the king, Ned’s old friend Robert came to visit.  Ned and Robert had helped take the kingdom from the king dubbed Aerys the Mad.  When Robert comes to visit he requests that ned become his “Hand,” which essentially does all the dirty or boring business the King does not wish to do. Eddard agrees, despite hardship from his wife, and decides to take along his daughters Sansa and Arya. Ned always tries to do the right thing, even if it would cause him additional hardship.   Cateyln Stark is of the House of Tulleys, a rich family who holds lands in Riverrun.  She is a strong woman, who loves her husband, however she sees nothing but ruin for their family at Eddard becoming the Hand of the King.

Jon Snow is the illegitimate child of Eddard Stark and an unknown woman.  He is the same age as Eddard and Cateyln Stark’s oldest son Robb.  While Eddard loves Jon, Catelyn cannot tolerate him due to being reminded of her husband’s infidelity early in their marriage.  After his father pledges to move south, Jon, knowing Catelyn would not allow him to stay at Winterfell, choose to join the Night’s Watch like his uncle Benjen Stark.  The Night’s Watch is similar to a monastery, if the monks traded prayer for swordplay.  Those who take the black become permanent member of the Night’s Watch, keeping the civilized world of the Seven Kingdoms safe from the wilds of the highest North by maintaining a giant wall as well as watching the north.  The Night’s Watch is a brotherhood sworn to the good of all the people in the Seven Kingdoms and thus also sworn not to marry, have children, or leave the Wall.

Sansa Stark is a typical 12 year old girl, in love with dresses and as a hopeful princess she quickly falls in love with the prince, Joffrey.  Arya Stark very unlike her sister does not want to fall in love or marry a prince, but would rather learn how to swordfight, a skill her father eventaully agrees to let her learn although her lessions are known as “dancing lessons.” Brandon “Bran” Stark stays in the family castle in Wintersfell because right before his father is to ride south with his sisters Bran is pushed off a building by Jaime Lannister the Queen’s twin brother and lover when bran catches them in their sin.  Bran thus has to struggle with being paralyzed at a young age.

Daenerys “Dany” Targaryen is according to some the rightful heir to the throne.  She and her brother Viserys are the only living descendants of King Aerys.  At 13 Viserys sells/gifts Dany to a powerful warlord in the  Dothraki clan, Khal Drogo.  Viserys hopes that in turn Drogo will grant him an army to take back his father’s throne, but the winy, pushy, abusive brother of Dany does not get his wish and if there is going to be another Targaryen on the throne it will have to be Daenerys herself, or perhaps one of her children.

Tyrion Lannister is brother to the Queen, Ceseri, but also an oddity and slight outcast to his family because he is a dwarf or “halfman” as he is more often called.  While aligned by the evil Lannisters by blood, Tyrion, due to his dwarfism, swings between tragedy and comic relief in the novel.  He is one of the most interesting characters as his point of view allows an insight into the Lannisters and a foil to the Starks.  Tyrion refuses or perhaps is not allowed to be aligned with either family and thus often ends up in the middle, this and his undying selfishness lends Tyrion to go to great lengths for his own preservation.