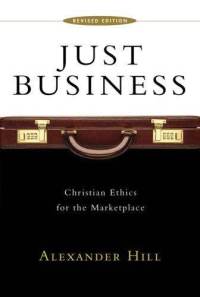 Since 2001, Alexander Hill has been the president and chief executive officer of InterVarsity Christian Fellowship. Under his leadership, InterVarsity successfully operates a publishing company and the world-renowned Urbana Student Missions Conference. In his previous position, Hill served as the Dean of the School of Business and Economics at Seattle Pacific University. Hill earned both his B.A. and his M.A. from Seattle Pacific University before attending the University of Washington School of Law, where he earned a J.D. In addition to his 2008 book, Just Business, Hill has published numerous articles. Hill and his wife, Mary, have two daughters and live in Madison, Wisconsin.

The exploration of meaning in the lives of individuals provides a fascinating difference between human beings and other living organisms. Instead of engaging in simple reactions to stimuli, human beings possess the capacity to ponder these actions at a deeper level.

While a bird eats for sustenance, humans can not only ask why the consumption of food is vital but also reason to an answer. In the case of living in a community, humanity enjoys the ability to question the way we interact and to create structures that help society function on a level playing field.

In Just Business, Alexander Hill spends the first portion of the book outlining a Scripturally based ethical structure of holiness, justice, and love for business practices. During the second section, Hill relates his Christian ethic to the dominant forms of ethical practice in the business world. And, finally, Hill utilizes the third section of Just Business as an extended analysis of case studies in light of his proposed Christian ethic.

Hill begins his pursuit of an ethical framework by proposing the concept of holiness as a critical component of an ethical lifestyle. He argues that the definition of holiness comprises four parts: zeal for God, purity, accountability, and humility. Hill writes,

The crucial point is that holiness is fundamentally about priorities. So long as a business is a means of honoring God rather than an end in itself, the concept of holiness is not violated. (25)

In other words, business means more than a competition around the highest profits. When a business person prioritizes holiness, that business is reoriented around its usefulness for others, not merely around its money-making potential.

However, the principle of holiness can be misapplied. When holiness becomes a set of rules, it becomes a harsh form of legalism; if holiness is used as a means to point out the flaws of others, it is merely judgmentalism; and, finally, when holiness becomes an excuse for roping off oneself from society, it functions as a false asceticism.

For the second foundational principle, Hill suggests the biblical notion of justice. In the business world, sadly, any action within the opaque legal framework is morally permissible no matter the injurious outcome on other people.

Justice provides order to human relationships by laying out reciprocal sets of duties and rights for those living in the context of community – business partners, employees, neighbors and family members. (37)

In other words, justice functions as a communal code that allows a society to function.

Similarly to holiness, the excessive application of justice leads to possible mishandling. More specifically, when justice is applied as the letter of the law, it can be exceedingly harsh and condemning. Hill asserts,

Justice tends to be cold and dispassionate, lacking the emotional heat and relational passion of holy love. (48)

Thus, it is important to buttress holiness and justice with the spiritual virtue of love. Acting as the glue between holiness and justice, love anchors these virtues in relationship. Hill argues that the definition of love includes empathy, mercy, and sacrifice.

As with holiness and justice, the biblical virtue of love carries potential difficulties. Hill notes that clergyman Joseph Foster proposed love as the only Christian ethic. Taken to extremes, love alone allows people to act in immoral ways for the sake of loving relationships.

Additionally, such positions offer ambiguity. When love is the only moral beacon, what should an individual do when a difficult choice means loving one person and “unloving” another?

Lastly, when others in society understand your single-minded loving ethic, they find opportunities to take advantage of your loving-kindness.

Therefore, it is important for holiness, justice, and love to act in unity because each virtue acts as a check and balance against the potential abuses of the other virtues.

The Space Between Duty-bound Ethics and Virtue Ethics

While the rest of the book discusses both the comparison between holiness, justice, and love and the application of these in specific case studies, the root of Hill’s argument resides in these Christian virtues. As Hill compares and applies this framework, his ethic meanders between a deontological, or duty-bound, ethic and a virtue ethic position.

On one hand, Hill argues that the holiness-justice-love ethic provides absolute answers in particular scenarios. On the other hand, Hill wants his position to maintain the fluidity of virtue ethics as difficult scenarios require nuanced decisions.

Additionally, Hill spends one paragraph at the end of the book discussing the role of the fallen world in the holiness-justice-love rubric. Although the themes of holiness, justice, and love ought to inform our decision making, do they apply equally to decisions after a mistake has been made?

In his one paragraph on the matter, Hill argues that no one is able to fully apply the holiness-justice-love ethic; we thus must all accept God’s gift of grace.

I question, however, the way the notion of grace is applied practically. In the business world, is grace a possibility when the Fall influences someone to make a decision with drastic consequences for the company? Is grace unconditional within a company? Lastly, how do holiness, justice, love, and grace apply to theories of termination? Does the Christian ethic argue against terminating jobs? It seems to me that Just Business remains silent on these issues.

By nature, any attempt at the deeper meanings behind human interaction will always fall short. As such, the holiness-justice-love rubric is useful but incomplete. Nevertheless, humanity is capable of pursuing these deeper questions, and significant meaning can result from such inquiries.

Hill’s Just Business is an admirable effort at applying biblical principles to business practices. High readability makes this book an excellent read for Christians in the fast paced business world. Hill carefully and accessibly categorizes his argument. Additionally, he inserts case studies and business stories to keep the reader’s attention throughout the discourse.

While I have my reservations about the conclusivity of his arguments, this book is a must read for anyone considering a Christian ethic for the marketplace.