Stieg Larsson’s 2005 The Girl with the Dragon Tattoo is a multi-layered crime/mystery novel.  Interestingly enough the entire Millennium Trilogy, or series, was published in Swedish after Larsson’s death in 2004.  The American version of the movie recently went to theaters, while the 2009 Swedish version is instant streaming on Netflix.  The Girl with the Dragon Tattoo was originally titled “Men Who Hate Women,” which perhaps is a more accurate title due to the large number of misogynist characters and abuse of young girls and women.

The novel focuses around the mysterious Vagner family.  Henrik Vagner the patriarch of the Vagner family and retired CEO of the Vagner Cooperation hires a defamed journalist/reporter  Mikael Blomkvist to wirte a family biography and discover what happened to Henrik’s grandniece, Harriet.  Harriett disapeared in 1966, on Sweden’s Hedeby Island, and since then Henrik has been obsessed with discovering what happened to this young girl of 16 who was very much like his own daughter.  To compound his grief someone, presumably Harriett’s kidnapper, sends Henrik a framed flower every year on his birthday.  Mikael begins his very literal cold case in the dead of Swedish winter. 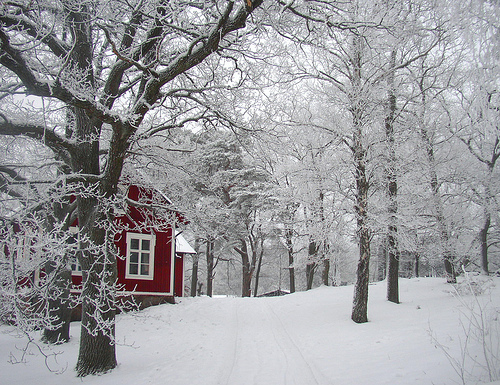 The novel is as compelling as it is gruesome.  The Girl with the Dragon Tattoo contains  violence (domestic and otherwise) as well as rape and other sexual assault. This is perhaps Larsson‘s own commentary about gender relations in Sweden as he himself witnessed the violent gang rape of a young girl when he was a teenager.  Each of the four parts of the book also include statistics about violence against women in Sweden.

Lisbeth Salander is every one of these statistics.  Salander, the most interesting character of the novel, is a hacker and researcher for Milton Security.  She ends up looking into Blomkvist for the Vagners, and helps him look for Harriet. Like Salander almost every woman in the novel has had some kind of abuse (sexual, physical, or both) whether in the past or continuing. Lisbeth despite her abuse refused to be labeled a victim.

Even though she was well aware of what a women’s crisis centre was for, it never occurred to her to turn to one herself.  Crisis centres existed, in her eyes, for victims, and she had never regarded herself as a victim. Consequently, her only remaining option was to do what she had always done–take matters in her own hands and solve her problems on her own.  That was definitely an option.

Lisbeth in fact refuses all labels, societal norms, and rules for politeness.  She is in many ways a contradiction and uses her aggressive clothing and attitude to cope with and prevent future abuse.

Salander was dressed for the day in a back T-shirt with a picture on it of E.T. with fangs, and the words I AM ALSO AN ALIEN. She had on a black skirt that was frayed at the hem, a worn-out black, mid-length leather jacket, rivet belt, heavy Doc Marten boots, and horizontally striped, green-and-red knee socks.  She had put on make-up in a colour scheme that indicated she might be colourblind.  In other words, she was exceptionally decked out.

Many Critics have hailed Lisbeth a feminist avenger, and The Girl with the Dragon Tattoo essentially a feminist novel.  Lisbeth would not accept this label, and it is not one that the novel deserves either.  Lisbeth is merely trying to do her best in a misogynist world, she does not care for justice, but her own brand of vengeance that incapacitates those who have harmed her or other women.  Feminism seeks equality between men and women that goes beyond the end of violence against women to social, political, and economic equity for both sexes.  Lisbeth in her overly countercultural manner does not seek justice, but vengeance and an end to abuse for herself and those she encounters.  While not a feminist superhero, Lisbeth remains a compelling character, one who I as a reader was equally engaged and mystified by. 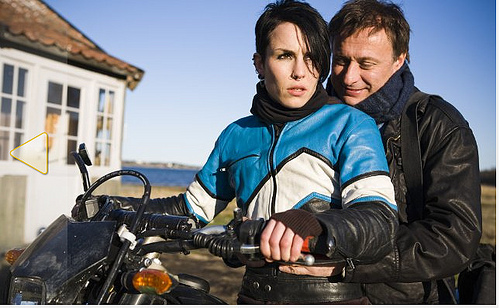 During Lisbeth and Mikael’s time together attempting to solve Harriet’s disappearance and unearth the skeletons in the Vagner family’s closet, they become lovers.  Mikael is a bit of a playboy and although he is the hero in some sense, he is almost as bad as his abusive male counterparts.  While Mikael does not physically, sexually or emotionally abuse women, as most men in the novel do, he cannot have a substantive relationship or friendship with women without sex being involved.  Despite Lisbeth’s prickly personality and closed off nature towards other people she finds herself needing Mikael’s company after the case is over.  This may be as close as it get to love for Lisbeth, sadly due to Mikael’s nature Lisbeth sees that he may not be a good person to long for.

Then she sat as if paralysed, thinking.  She had never in her life felt such a longing.  She wanted Mikeal Blomkvist to ring the doorbell and…what then?  Lift her off the ground, hold her in his arms?  Passionately take her into the bedroom and tear off her clothes?  No, she really just wanted his company.  She wanted to hear him say that he liked her for who she was.  That she was someone special in his world and in his life.  She wanted him to give her some gesture of love, not just of friendship and companionship.  I’m flipping out, she thought.

Due to price of movie tickets, I cannot speak to the American film, but the Swedish version is overall darker than the book.  The darkness is created with added scenes of violence and less humanity or light in Lisbeth’s character.  The Swedish film also takes great liberty with the story line of the novel, the trail of evidence leading to the solving of Harriet Vagner’s disappearance as well as Lisbeth’s personality and relationship with Mikael.  The American version is reported to not be a remake of the Swedish film, but rather to be a different interpretation of the book and Lisbeth herself.  I hope the American version of The Girl with the Dragon Tattoo, recent winner of 2012 Oscar for Film Editing, captures Lisbeth in all her contradictions.