I have decided that the most lavish picture of academic grace is glancing over a syllabus and seeing a novel assigned.  This quarter for Evangelism and Mission we are gifted with being able to read and discuss The Sparrow. 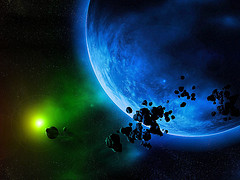 Mary Doria Russell’s first novel, The Sparrow, can be simplistically described as Jesuits in Space.  Her later novels, aside from The Sparrow and it’s sequel Children of God, are best described as historical fiction.  While The Sparrow is true science fiction, the novel is much more complex than just a mission to space, as the novel gets to the heart of what a life serving God entails–disappointment.  The story is not at all about telling aliens about Jesus, but rather about how mission can be a converting ordinance for the missionaries.

The Jesuit scientists wen to learn, not to proselytize.  They went so that they might come to know and love God’s other children.  They went for the reason Jesuits have always gone to the farthest frontiers of human exploration.  They went ad majorem Dei gloriam; for the greater glory of God.

They meant no harm.

But of course harm does happen.  The Sparrow bounces back and forth from 2059-60 where Emilio Sanchez, one of the protagonists, has returned from Rakhat, sole survivor of the mission, and 2019 where Earth is just learning about Rakhat leading him to set up a crew and expedition to the alien world.  Emilio’s crew is made up of himself, a priest/linguist, as well his friends who all happen to be a doctor, engineer, astronomer, biologist, programmer, commander and musicologist.  Surprisingly the mission is evenly comprised of Jesuit Priests and “civilian” volunteers who  range from being Jewish to happily athiest.

Emilio comes into the mission to Rakhat aware of his own agnosticism, aware that while the Gospel was 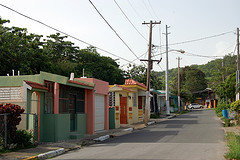 moving to him, the miracles were unintelligible.  Despite Emilio’s unbelief he is a good priest, working among the poor in Puerto Rico and even getting some American, liberal do-gooders, Anne and George, to help with his work in Puerto Rico.  Throughout the process of discovering the new planet, traveling there and living amongst its people, the Runa and Jana’ata, Emilio falls fully in love with God.  It is not just Emilio who goes on a journey towards God as he moves further from earth, in fact the entire crew is transformed as they set foot for the first time on Rakhat.

Those who saw [Emilio’s] face as he pushed himself to his feet, laughing and crying, and turned back to them, incandescent, arms flung wide, recognized that they stood witness to a soul’s transcendence and would remember that moment for the rest of their lives.  Each of them felt some of the same dizzying exultation as they emerged from the lander, spilling from their technological womb wobbly and blinking, and felt themselves reborn in a new world. 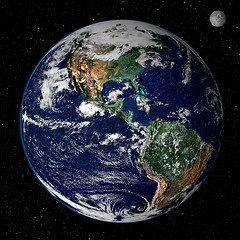 For all the good, wonder and beauty that Emilio experiences on Rakhat there is plenty of horror, war and pain.  Emilio fully believes that the coincidences that lead him and his friends to the new planet were orchestrated by God.  So if they came to Rakhat under God’s will and surrendered to God’s will then everything that happens is God’s will too.  This leads Emilio to return to earth feeling betrayed by God as he lived though the murder of friends, ravaging of Runa villages, the destruction of his hands, rape, and imprisonment while on Rakhat.  Emilio returns embittered by his experiences and blaming God.

Emilio, after his return to earth, asks another Jesuit John “Do you experience God?”  John’s response is this

I would have to say that I find God in serving His children.  ‘For I was hungry and you fed me, I was thirsty and you gave me to drink, I was a stranger and you welcomed me, naked and you clothed me, sick and you cared for me, imprisoned and you came to me.’

The words lingered in the air as the fire popped and hisses softly.  Sandoz had stopped pacing and stood motionless in a far corner of the room, his face in shadows, firelight glittering on the metallic exoskeletons of his hands.  ‘Don’t hope for more than that, John,’ he said.  ‘God will break your heart.’

The Sparrow is a beautiful novel filled with characters who are all struggling in the mire for holiness.  Emilio’s story is one of 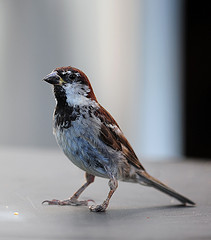 falling deeply in love with God and after catastrophic life circumstances finding his heart broken.  The title of the novel is a biblical illusion to Matthew 10:29 which states that a sparrow cannot fall to the ground without God’s care and knowledge.  The caveat that Russell adds is that the sparrow still falls.  After all nothing, not even marriage or becoming a priest  can protect the fragility of a human heart from fracturing.  As a linguist Emilio must tell his story to begin the mending of his heart.  After his story is fully told, Felipe and the Father General reflect on Emilio’s journey

“You know, he was always a good priest,” Felipe told them, remembering, “but it must have been about the time that they were planning the mission, something changed in him. It was like, I don’t know, sometimes he would just–ignite.”  Felipe’s hands moved, making a shape like fireworks.  “There was something in his face, so beautiful.  And I though, if that’s what it’s like to be a priest…It was like he fell in love with God.”

“Offhand,” said the Father General wearily, in a voice dry as August grass, “I’d say the honeymoon is over.”