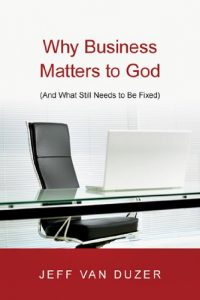 Jeff Van Duzer is the dean of Seattle Pacific University’s School of Business and Economics. Previously, he practiced law for more than 20 years with a large international law firm concentrating in commercial transactions and environmental law. Van Duzer received his J.D. from Yale Law School. He writes and speaks frequently in both church and professional settings.

In most home, work, and church settings, a clear disconnect exists between Christianity and business. In general, the average Christian relegates his or her faith to the personal sphere. Beliefs and practices resulting from Christian tradition are channeled primarily within the family with the purpose of creating moral individuals and healthy relationships.

When an application of faith to business is pursued, one of two extreme postures is typically taken: Christians understand the business world to be in conflict with the life of faith, thereby pursuing their work lives independent of their spiritual lives. Or, they see little or no moral tension between economic and spiritual pursuits, resulting in “business as usual” with no resulting changes in actions or outlook.

The pulpit, similarly, avoids mingling these two topics. Apart from rhetoric encouraging parishioners to live Monday through Friday in an identical manner to Sunday, pastors rarely mention the theological merit of work. For this reason and certainly many more, numerous Christians value business for its instrumental contributions to “morally elevated” occupations such as church, missionary, and nonprofit work.

Van Duzer questions these assumptions in Why Business Matters to God. While value certainly exists in the contributions business makes to the nonprofit sector, Van Duzer contends that business in and of itself contains intrinsic value.

Leaning theologically on the Reformed rubric of God’s activity in the world — creation, fall, redemption, and New Creation — as well as theologian Reinhold Niebuhr’s classic work in Christ and Culture, Van Duzer suggests a new framework in which to imagine business. He recommends supplanting the generally accepted business practice of maximizing shareholder value with a “business-as-service model,” which he contends is more closely aligned with God’s purposes for economic enterprise.

What is the “business-as-service model?” Van Duzer defines it simply when he writes, “The purpose of business is still to serve in two key aspects: (1) to serve the community by providing goods and services that will enable the community to flourish, and (2) to serve employees by providing them with opportunities to express at least a portion of their God-given identity through meaningful and creative work” (114).

In a certain sense, Van Duzer’s business-as-service model resides within the realm of ideas reacting against the dominant view of maximizing shareholder value such as stakeholder theory, social entrepreneurship, conscious capitalism, and creative capitalism; and on top of new ownership structures, like the B Corporation, that facilitate a legal framework from which to pursue multiple bottom lines. More importantly, though, Van Duzer’s position re-imagines business through a practical theological lens.

Whether business models itself in service or shareholder value, it operates in what Van Duzer calls the “messy middle,” a state on the theological timeline between the resurrected Jesus and the promises of glorified perfection yet to come. The Jewish and Christian scriptures promise a perfect, future city that exhibits all that God originally intended for humanity. Yet brokenness keeps us from fulfilling these promises in our current time and context. For Christians, a perfect application of the “business-as-service model,” therefore, is impossible until the full Shalom in Jesus’ return is made manifest.

Although work is currently tainted by the fall, it presents Christians in the business world with the opportunity to exercise both creative and redemptive work. God first illustrated the calling of humanity to engage in creative work through the naming of the animals by Adam. Similarly, business people in modern times engage in creative work when they develop new software, begin an entrepreneurial venture, or engage in other additive ventures.

Intermingled and as equally important, business also focuses on fixing and restoring that which is fractured, a necessary measure because of the full import of the fall. While the “messy middle” hinders the full realization of a perfected business-as-service model, redemptive and creative work offers Christian business people a navigable compass in our less-than-perfect world.

Theologically speaking, Van Duzer’s business model emphasizes the community over the individual. Typically, when managing decisions, the modern business person applies a self-interested ethic often under the umbrella of consequentialism. Authors such as Milton Friedman continue to cite — perhaps incorrectly — Adam Smith’s invisible hand as the root of all actions in the free market.

Business as service, on the other hand, stresses the importance of other people. In this way, business serves the economy, or better translated: the household. Just as the triune God exists not as an individual but as three persons in relational community, so too business exists in relational community with the rest of the economy and with other important, mediating institutions of culture.

Theologian, M. Douglas Meeks writes in God the Economist: The Doctrine of God and the Political Economy,

“All the persons of the triune community have their own characteristics and their own tasks. Yet they are constituted as persons precisely by their relationships with other persons of the community. The same should be said for human economic community. There is in reality no such thing as a radically individual and isolated human being. We are what we are as a result of being constituted by our relationships with other members of the communities in which we live. All social goods are given to us communally.”

A theologically minded Christian in the marketplace must remember that his or her actions affect the local community and the global community. Where self-interested or narrowly focused decisions directed toward increasing shareholder wealth often neglect other stakeholders, the business-as-service framework offers an important and theologically grounded foundation to serve the broader community.

Why Business Matters to God

God created work and declared that it was good. Why Business Matters to God contends with the schismatic notion that business and Christian practices reside in divergent spheres.

Where the popular ideologies suggest that the positive nature of business subsists in its instrumental value — its capability in funding work that actually matters — Jeff Van Duzer asserts that business, when understood as service to the global community, maintains intrinsic value — significance by its created purpose to both create and restore a hurting world.

Whether your occupation involves managing a large company or you just recently entered the job world, this book is a must-read for those interested in the relationship between Scripture, work, and business.