This weekend I attended the Bottom Billions | Bottom Line Conference hosted by SPU’s Center for Integrity in Business. The event served as a convergence zone between business, nonprofit organizations, and the academy seeking to better understand ways that business can help alleviate world poverty.

Of the many interesting subjects discussed at the conference, the topic of microfinance seemed to continuously echo through my head. For those unfamiliar with the term, microfinance occurs when banks or nonprofit organizations loan small amounts to the poor, helping them to use these miniscule amounts of capital to begin income-generating endeavors.

Muhammad Yunus, founder of Grameen Bank, observed that the only thing the poor lacked was opportunity. Without capital, the poor would take a loan from a moneylender at exorbitant rates in order to partake in the economy. At the end of the day, these people took home pennies to support a family. Yunus figured that if he could loan these slight sums at low interest rates, the poor could enjoy selling the products of their labor on the open market, thus creating economic capital and a trail out of poverty. 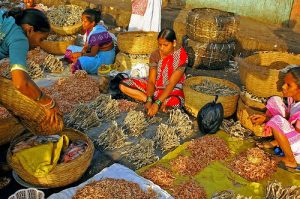 Charity, on the other hand, gives freely without expectation of return. Many, though, have suggested that pure charity does not eradicate poverty, because the poor become dependent on receiving aid. Blogger Filip Spagnoli aggregates international development aid on his website. The evidence he has compiled suggests that the amount of aid contributed to these developing nations is staggering, and yet economic growth is not a result.

Would development function differently if aid came in the form of a loan instead of charity? Yunus believes that loans to the poor provide the best investment.  Many stuck in the cycle of poverty are smart and hard working; they just need the money to start. While big banks typically consider micro-loans to be both risky and inconsequential, Yunus’ experience argues that the poor possess the highest incentive to repay their loans.

Of course, when unforeseen problems such as natural disasters and economic meltdowns place the poor in positions where they are unable to repay the loan, Yunus extends grace and loans more money to help the poor back on their feet. In this way, microlending encourages entrepreneurial spirit. Where charity gives the widow a fish, microfinance engages in teaching the widow to fish.

Although charitable giving in and of itself is never a bad thing, I do wonder if it is the best thing. Of course, a free gift without expectation of repayment carries the highest blessing for the receiver, yet long term, I wonder if microloans create a better society.