Downton Abbey is an Emmy award winning Series from creator Julian Fellowes (Godsford Park).  The series focuses on a British family during the short years between the sinking of the Titanic and the start of World War I. The show is about the social and political entanglements of the Crawley Family, whose patriarch is the Earl of Grantham, as well as the extensive house staff for Downton Abbey itself.  Like Madmen, Downton Abbey is dialogue rather than action based and has a slower feeling than many modern shows. 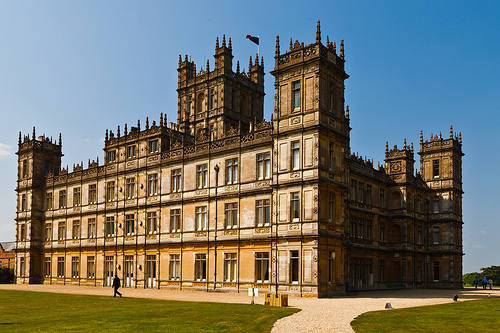 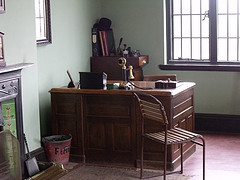 Downton Abbey holds a very strong tension, between the way things have always been in England and the quick changes that are coming upon the whole of the “civilized” world.  Much of the house staff and the Crawley family are resistant to change, but that does not mean that electricity and the telephone are not introduced to Downton.  Dispute the technological changes there is still a great effort made by everyone for formality, order, hierarchy and having all things (and all people) in their places.

This includes women.  Robert Crawley, the current Earl of Grantham, and his wife Cora were blessed by three daughters Mary, Edith and Sybil.  Because they had no sons, they also have no heir, unless their oldest daughter is to get married.  Mary could be given the inheritance without the title, but Robert is unwilling to let this kind of change happen.  Mary is particularly frustrated with her aristocratic life as her husband will be the heir, thus leading both her parents to put pressure on her to marry and all suitors are distant cousins to keep the title in the family.  Mary remarks to her third cousin once removed, Matthew, that

“Women like me don’t have a life.  We choose clothes and pay calls and work for charity and do the season.  But really we are stuck in a waiting room until we marry.”

Preserving the hierarchy means that women do not have jobs, or many skills besides those that would help them find a husband.  Violet, or Lady Grantham, Robert’s mother and grandmother to Mary, Edith and Sybil, is so isolated from the common world that she does not know what a weekend is, until Cousin Matthew, who is a lawyer, explains it to her.  She even resists the youngest daughter, Sybil, who is a reformer, wanting to do something more with her life.

Violet: “Why would you want to go to a real school? You’re not a doctor’s daughter.”
Sybil: “Nobody learns anything from a governess, apart from French and how to curtsy.”
Violet: “What else do you need? Are you thinking of a career in banking?”
Cora: “Things are different in America.”
Violet: “I know. They live in wigwams.”

In fact according to Violet, Sybil by virtue of her sex and maritial status cannot even have opinions:

Mary: “Sybil is entitled to her opinions.”
Violet: “No. She isn’t until she is married, then her husband will tell her what her opinions are.” 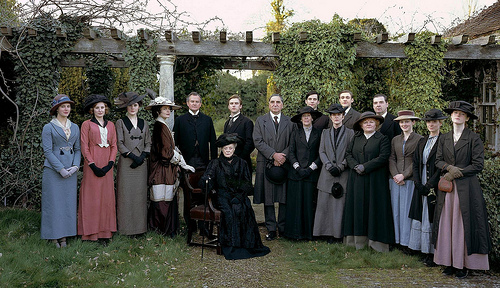 It is not only women who are kept in a certain place, but also the house staff.  Just as with the family, and particularly the sisters, there is a hierarchical structure, or pecking order.  Mrs. Hughes, head housekeeper, and Mr. Carson, butler, act as referees amongst the house staff, but also act as surrogate parents.  Mr. Carson is particularly resistant to change

Carson: “We may have to have a maid in the dining room.”
Robert: “Cheer up, Carson. There are worse things happening in the world.”
Carson: “Not worse than a maid serving a duke.”

The change that was so slow to come upon Downton Abbey, is likely to be forced during the next series. During a garden party a telegram arrives announcing that England is officially at war with Germany.  Gwen, a housemaid, leaves to become a secretary.  Thomas, a footman, leaves to learn medicine so that he can be a medic rather than a soldier in the war.  Matthew refuses to become Mary’s husband. Certainly things are changing, what really is a squabble amongst sisters or servants at the outbreak of war?  As the tagline for the next series aptly states “War changes everything.”