Film Review–Life in a Day 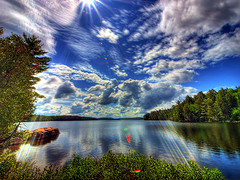 Life in a Day is a Sundance Film Festival documentary compiled from video taken by people all around the world in in order to show what life is like on Earth during an ordinary day.  The documentary was accomplished by asking individuals to film their lives, on July 24th, 2010. In fact the tagline for the documentary is “Filmed by You.” The participants were also asked to answer three questions: 1) “what is in your pockets,” 2) “what do you love” and lastly 3) “what do you fear.”   4,500 hours of video from 192 countries were submitted.  Life in a Day is result of the hour and 35 minutes of video that made the cut.

Life in a Day is not an extraordinary documentary, it is not life changing, but it is interesting. Life in a Day is ordinary and yet it is also very odd, which seems to come with the peculiarities of individuals.  Describing what happens in the video really just results in lists, the moon rises, a man rides his bicycle to temple, a man in Virginia rides an elevator, a giraffe gives birth, a man comes out to his grandmother over the phone, women in Africa sing and beat grain, a boy plays with Legos, a couple gets married, the sun sets, fireworks. 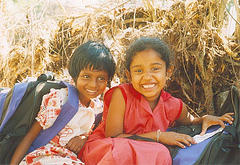 The documentary touches on all aspects of life except, because it was filmed in the summer, children going to school.  There are brief glimpses of love, loss, ordinariness, extrodinariness, religion, politics as well as every developmental stage of life and daily human routine from morning to night. Life in a Day covers the beauty of humanity particularly in how we love and care for children as well as the horror of humanity in terms of war and violence.

At the end of Life in a Day what sticks with me are the tiny glimpses of life from someone else that I have been entrusted with.  Did the young mother with cancer survive?  Did the wifeless goat milker marry?  Is the maid who was preparing offerings for Vishnu still doing so for every full moon? 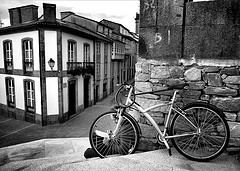 The majority of the documentary is simply video montage, but there is plenty of dialogue as well. One of the most interesting stories came from a Korean who is traveling the world, his video clips happened to have more dialogue as he explains his mission and why he has been riding his bicycle around the world.

“Good morning everyone, Bonjour, Buenos Dais, Namaste, Sabah-il-kheir.  My name is  Oklwan Yoon, I was born in Korea, it doesn’t matter south or north Korea. I’m traveling around the world by bicycle.  Today it’s been nine years and 36 days.  This is Kathmandu, Nepal.  I have been in 190 countries so far.  I have been struck by cars 6 times, 5 times surgery.  There are so many careless drivers in the world.”

As Oklwan Yoon takes a break from cycling to have a cup of coffee, he reminises about his travels and homesickness when he sees a fly drowning in the dregs of his cup:

While standing in a temple full of monkeys Oklwan Yoon states:

“It is not easy to explain motivation.  Can I do something to reunite Korea?  It looks impossible, it looks out of my hands.  But impossible is possible.” 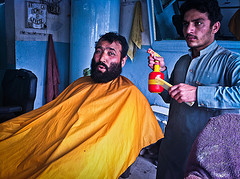 Day.  In watching the documentary the viewer pauses his or her own  life to experience life of others and the ordinary things that humanity shares.  However when the credits roll, the viewers journey of life in all of its extraordinary peculiarity continues. Because a persons life can only be understood by others in a general sense of common humanity, but none of us will truly know fully how it feels for Oklwan to feel new all because of a simple haircut.

“When I close my eyes I can see all the different people in the world, from town to town,  from country to country.  I can feel it, I can touch it, I can see it.  I feel like born again because of my haircut.  Its time to continue my journey.”