The Debt, starring Helen Mirren, Sam Worthington and Tom Wilkinson, is a movie that is not easy to forget.  Not only because it involves Jewish Mossad spies hunting Nazis in the 60’s around Berlin, not only because there are moments that are unbearably creepy, but because The Debt is a perfect recipe for reconciliation.  And yet there is barely an ounce of reconciliation or redemption to be found. 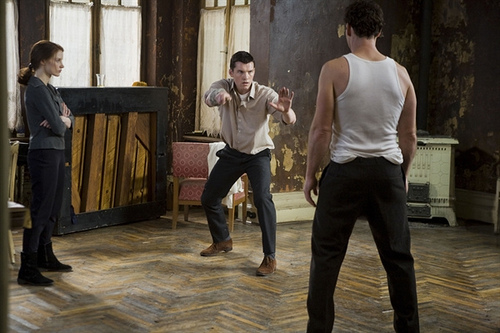 The Debt begins three Mossad agents leaving a plane, and their mission, to be reunited with their homeland  Israel in 1966.  This is juxtaposed with a speech in 1997 being given by the daughter of two of the spies, who has just written a book about their mission.

We should never forget how young they were.  My father, Stephan Gold, was the youngest unit commander in Mossad.  David Peretz had his 29th birthday while on the mission.  When my mother crossed the checkpoint into Soviet controlled east Berlin she was only 25.  They had the courage to confront an imaginable evil.  A man whose sadistic experiments left thousands disfigured or dead.  Who became known by a name which defiles the annals  of medicine–surgeon of Bernhardt.  Their mission had been to capture him and return him to Israel to stand trial.  Instead it ended on the streets of East Berlin.  These three dared to relive Israel’s greatest nightmare.  The greatest pain. In the simple act of facing the monster they helped vanquish it. This book is dedicated to my inspiration my mother Rachel Singer.

The Debt bounces back and forth between “the mission” in 1965-66 located in Berlin and 1997 when the three agents are long retired grandparents. However, the mission is not really over.  The story they told the world, the story they wanted to believe, was that on New years eve, the surgeon of Bernhardt, their captive, gets loose and attacks Rachel, but Rachel valiently shoots him before he can fully escape.

The mission is made up of Rachel, whose mother was killed in the Holocaust. David who is unsmiling and bent on justice for his family, who were also killed in the Holocaust.  And lastly Stephan who is much more jovial, equally happy to practice hand to hand combat with David as he is to drink, smoke, and play the piano. Part of David and Rachel’s cover in Berlin is that they are married.  Although Rachel slowly falls in love with David, he is unresponsive, leading Rachel to conceive Stephan’s child while the three of them are in Berlin.  Rachel and Stephan eventually get married, but by the time we see Rachel in 1997 at her daughters celebration, they are divorced.

The surgeon of Bernhardt, or Dietrich Vogel, is what the whole mission is about.  Their goal was to find him, confirm his identity and then capture him for the soul purpose of bringing the doctor to Israel to stand trial for his crimes against 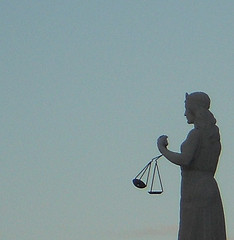 humanity. In 1965, the surgeon of Benhardt is nothing more than a harmless, but creepy, gynecologist.   Rachel is left the unfortunate task of making contact with the surgeon.  Because of the Berlin wall, which is heavily guarded, Rachel, David and Stephan must come up with an elaborate plan to sneak the doctor out of German boarders.  After kidnapping Vogel, they are unable to smuggle him out of Germany, leaving them two choices: kill Vogel, or keep him prisoner until he can be brought to Israel.

Their plan would have been simple if they were seeking vengeance.  However, because they were on a mission of justice, they are now tasked with keeping the surgeon captive in their small apartment. Vogel refuses much of the help, feeding, washing, and clothing.  These scenes are tense, frightening, immeasurably creepy.  The Mossad agents are living with their own picture of evil, the bogyman who gave them nightmares as children, the bogyman who helped to kill their parents.

During one of these scenes Vogel asks Rachel

Stephen, who believes Vogel is not human, slowly dehumanizes Vogel, covering his head with a bag. This causes a fight between David to Stephen where David, focused on justice rather than vengeance states:

David clings to the notion of justice even if it means he has to treat Vogel with respect.  However, in Vogel there is no repentance, no sorrow for his horrendous crimes, no need for forgiveness.  In fact it seems Vogel would rather be killed as an animal than live as a human among the Jews.  David after being verbally antagonized by Vogel states

David: You blind children trying to change the color of their eyes.  You inject people with petrol.  You replace hands and legs and watch as they…this is not medicine this is sickness.  This is disease.
Vogel: So we were all insane. Is that the answer?
David: Oh there is no answer.  I’m not looking for an answer.  I’m looking to….
Vogel: You’re trembling.  I think you are the one who is afraid David.  Afraid of the monster.  Boo. [laughs] why do you think it was so easy to exterminate you people? your weakness.  I saw it every day I saw it.  Every one of them thinking only how to avoid being flogged or kicked or killed.  Everyone only thinking of themselves. Why do you think it only took four soldiers to lead a thousand people to the gas chambers. Because not one out of thousands had the courage to resist.  Not one would sacrifice themselves, not even when we took their children.  So I knew that you people had no right to live.

The conversation ends when David begins beating Vogel. Now the audience, finally, gets to see the truth.  Stephan pulls David off Vogel and both leave to cool off.  Rachel is left alone in the apartment.  Vogel escapes into the Berlin night, using a piece of broken plate and Rachel is injured struggling against him.   The Mossad Agents then discuss what they are to do, lie and let the mission be a success–bring justice to Israel.  Or tell the truth.

Rachel: We can’t lie about this
Stephan: We have to, we have to.  This isn’t about us.  This is about Israel.  This is a national humiliation. We can’t be seen to fail.  And in the end Vogel rots away in some jungle always looking over his shoulder waiting for a bullet.  Whose to say.  Maybe that’s a worse fate.  Maybe that’s…the important thing is justice,  justice is seen to be done.
David: He’s gone, what does it matter he’s gone.
Stephan: He’s right, it makes no difference, no difference….the truth says in this room between us.

But in 1997, the surgeon of Bernhardt returns, showing up in a psychiatric unit in Ukraine.  Stephan is in a wheel chair and David has recently died, leaving Rachel the only one left fit enough to continue to cover up their lie or more aptly murdering the surgeon.  Rachel travels to the Ukraine and through some odd circumstances eventually finds Vogel.  The encounter leaves them both dead, but not before Rachel has written a letter to a journalist proclaiming the truth.

My name is Rachel Singer.  Please publish what you are about to read.  In 1965 I was part of a mission to kidnap Dieter Vogel, the surgeon of Bernhardt and bring him to Israel to stand trial.  We have always claimed that Vogel was killed trying to escape.  But this was a lie.  A lie I have lived with for 30 years.  And now I understand that I must tell the truth.

The Debt is a movie that I have been thinking about ever since it was in theaters this summer and has come increasingly to mind since I am taking THEO 6512: Reconciliation and Intercultural Studies.  According to The Debt, vengeance is easy. Justice is much more difficult, particularly when the victim attempts to view the perpetrator as human.  Justice, in The Debt, also leads to more deaths than just the guilty.  Truth plays a role, as it is impossible to achieve justice or reconciliation without it.  The biggest thing ﻿The Debt leaves me with is questions, namely does the pursuit of justice negate any hope of reconciliation?