Film Review: What Would Jesus Buy?

What Would Jesus Buy? is a 2007 documentary produced by Morgan Spurlock, who directed, wrote and stared in Supersize Me. However Spurlock does not make an appearance in this documentary, as the clear headlines are Reverend Billy and the Church of Stop Shopping.  The documentary focuses on how our nation has moved from individuals being producers to only being consumers, particularly around the holiday season.  In fact now is the first time since the great depression that American household have no money in their saving accounts.  Furthermore, Americans today tend to spend only 1 hour a week on religion and around 5 hours on shopping.  Christmas is no longer a time of anticipation, but of dread. 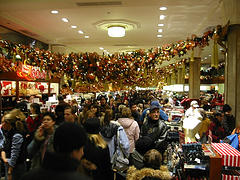 American’s shopping grows exponentially worse at Christmas where many people go into debt to ensure that their families, especially children, receive the best gifts.  Christmas is a wonderful selling opportunity for cooperations because it combines consumerism with the feeling of love and affection for friends and family.  In America children are socialized to see the material goods given at Christmas with love.

While most believe that it is the gifts that make Christmas special, clearly they have never seen or read The Grinch that Stole Christmas, it is in fact the quality time with family that makes Christmas exceptional.  The documentary interviewed several people who stated that their favorite Christmas was when they were at their poorest.  As spending quality time with family and friends was important rather than what was opened from under the tree. 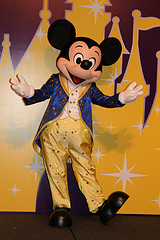 Rev. Billy is the leader of the Church of Stop Shopping and spends plenty of time street preaching as well as speaking to his own congregation.  Billy began being a street preacher after seeing the destruction that consumerism brought to his neighborhood.  The documentary shows his rise to the pulpit when he walked into a Disney store and yelled that Mickey Mouse is the Antichrist.  Rev. Billy tends to focus most of his energies on christmas, which stems from the belief that if we change Christmas then our attitude toward the whole year will also change.

The Church of Stop Shopping, is more about more ethical and conscious shopping instead of actually ending all shopping.  From the documentary it is uncertain if Rev. Billy and the Choir are a performance activist group or view themselves as a legitimate church.  Is Rev. Billy going to an extreme to make a point while borrowing religious language or is this his way of spreading the Gospel message? 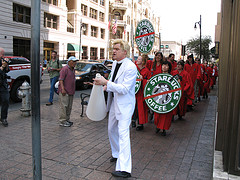 Rev. Billy and gang exorcizes Starbucks, Walmart, Victoria Secret, cash registers, credit cards and the like on their tour.  During the tour, the vegetable oil for the bus froze leading Rev. Billy to pray a lengthy prayer of confession due to having to buy gas to continue their journey.  Billy felt as badly about purchasing fossil fuels as would have if he had cheated on his wife, who is also apart of the movement.

The shopping mall is the symbol of everything that has gone wrong with Christmas.  Rev. Billy and the Choir ended up visiting the Mall of America to spread their message to the masses.  It was a very short visit as police quickly escorted the group out because of their protesting. The Church of Stop Shopping finds that even if they cannot get individuals to change their behavior, the very act of interrupting shopping is a good first step and a small victory.

What Would Jesus Buy? focused on the poor wages for Walmart employees both in store as well as the employees that make the 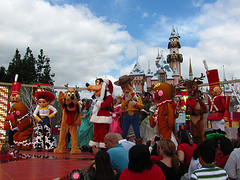 clothing overseas.  However, the Walmart model has been seen so successful, monetarily, that many other companies have followed suit.  Rev. Billy even visited Walmart headquarters, after having a funeral for “small town America.”  The tour lasted for the entire month of December and traveled from coast to cost, visiting many department stores and praying the demons out of many a cash register.  On Christmas Day Rev. Billy and the Choir protested at Disneyland.

Rev. Billy and his followers do purchase things.  They look for products that have been made in America, and hopefully companies where the money will filter into the local communities.  Smaller businesses instead of international companies should be supported as well.  Cheaper is not always better, particularly when the employees of companies are being shorted on wages in order to create cheaper products. 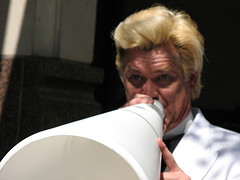 Rev. Billy with his white suit, bleached hair, stylized speech and Elvis like personality does not seem like a pastor that I would want to spend much time listening too.  Despite Rev. Billy’s odd personality he does have some very good advice “you don’t have to buy a gift to give a gift.”  With a growing distaste for consumerism, which matches my shrinking seminarian budget, I plan on making a few more christmas gifts this year.  According to Rev. Billy it will be good for my soul.