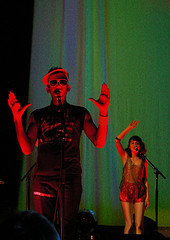 Sufjan Stevens’ album Age of Adz, on Stevens’ label Asthmatic Kitty, was understood to be one of the best albums of 2010. The New York Times put Age of Adz as number five in their Top Pop Anthems for 2010. As another year has ended it becomes clear that Stevens’ depth of genius in Age of Adz will take more than a year, nay even a lifetime, to comprehend. Furthermore, Stevens’ just recently finished his tour, mostly comprised of Age of Adz, which begs for further analysis  “Now that we’re done being shocked by the weirdness of it all…”

NPR devoted some time Age of Adz in a first listen. But now Heather and Josh from Seattle Pacific Seminary will evaluate Stevens’ last album after several hundred listens. We want to look at Age of Adz as a whole, cohesive album, while giving way for the peculiarities of the individual tracks to also take some spotlight. Age of Adz is as a very cohesive, focused piece somehow composed out of chaos. Sufjan mentioned somewhere that he began and ended the album with folk because that’s ultimately what he is, a folk artist. But he describes his jaunt into electronic music as something he’s always been into (see his album Enjoy Your Rabbit, 2002), AND something that is more…”explicit.” An odd word to use, yes.

Simply we want to share why Stevens has infatuated us for over a year now with Age of Adz. We encourage you to listen along to the album as you read, send us your disagreements, and what you think about the album.

Themes:
Madness
If love drives us, what could it drive us to in all its passion, especially when diverted by the object of its desire? In Adz, Stevens seems to think that madness is one of the possible destinations along the unmarked paths of love, and probably more like a ditch that is located a little too close for comfort along the side of every possible route. Enormous wrecks can occur at moment’s notice in the pursuit of love, and the true pursuit of love can only be made at the highest level of risk. Madness isn’t the goal, but the line between love and madness is quite thin. As one listens to Adz, the fear of madness and the desire to be with the beloved battle one another, and this becomes apparent even in the wild cacophony of strange, otherworldly, frenetic sounds and tightly orchestrated strings and brass.

Love in All its Forms and Colors
Age of Adz is just as much about love as it is madness. In fact every song, even Vesuvius, 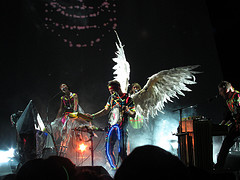 deals in some way with the theme of love. The album explores the many kinds and stages of love, but tends to focus on the painful end or the aspects of longing desire. Love it seems is fleeting, it does not quite work out. The love of friendship, while fine is not enough, the affections of a lover can easily be lost, and love is not always consistent with faithfulness to God. Love according to Age of Adz is dirty, painful, and focused on too much, but of course it is still lovely, still to be desired.  As the Impossible Soul states “But all I want is the perfect love/ Though I know it’s small, I want love for us all.”

Apocalypse/ End of the World
Another constant, driving force through Adz is the impending doom of the world. Channeling the schizophrenic artist and self-proclaimed prophet Royal Robertson–who predicts biblical destruction in the near future, much of which is evidenced by the alleged infidelity of his wife–Stevens brings us images of the disastrous future that awaits, and what happens in the meantime. But Adz isn’t a list of dispensationalist tribulations that conclude in a terrifying, universal judgment–though the images are certainly there. Instead, it is a deeply personal vision of a possible, not-so-distant future in an intimate relationship. Stevens’ evocation of the apocalypse is a revealing of the inherent risk of a real relationship, and of what is truly at stake when someone loves another. If we lose a significant part of ourselves, would we describe it as feeling like the end of the world? Stevens would. 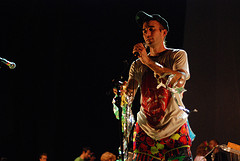 Laughter as Submission
Laughter plays an interesting role in Age of Adz.  In some instances is it highly desired (Too Much), and in other places there is a complete refusal to surrender to laughter and the emotions that correspond with it. (Bad Communication & Vesuvius).  Laughter is also portrayed negatively in the fact that it is dismissive to the emotions of others (Impossible Soul).  With the madness of bouncing between the morbidity of death and unprecedented if rehearsed joy the negativity around laughter shows a restraint to fall fully into madness. After all “I want to be well.”

Exaggeration–It Is All Caused by Love
Notice the use of “all” here? Of course it’s not completely true, but it makes a far stronger point. This is what Stevens is often known for, with his excesses of pageantry on tour, the wings and the multi-colored, neon tape applied across every surface, balloons flying everywhere. Love, in the throes of Stevens’ passions, causes schizophrenia like his Adz muse, Royal Robertson, who depicted visions of the end of the world, especially after he was convinced his wife was cheating on him. For Stevens, however, this desperate pursuit of love breeds the wavering, hope-filled self-talk of a person mired in the risk of giving one’s soul to another and not knowing how it will be received: “Boy, we can do much more together, it’s not so impossible.” What choice does Stevens have in the meantime but to express his feelings on the most cosmic scale? Though Stevens could choose to wax poetic about roses and the like, he instead chooses the grandest images, the most dramatic visions. No, he isn’t literally falling into a volcano. But listening to “Vesuvius,” one can feel the edge of the precipice all the way down to one’s toes, and the sense of great risk pervades.

And words are futile devices

…But now I’m lonely as that, I put up a fight
So pick up your battering ram, love, I want to see it

Listening tips
INSANE.  Religious themes: afterlife, eternal living, Gloria, Victoria. This song feels like finding love at the end of the world only to give it up.

…Lover, will you look from me now
I’m already dead, but I’ve come to explain
Why I left such a mess on the floor
For when you went away I went crazy
I was wild with the breast of a dog
I ran through the night with the knife in my chest
With the lust of your loveless life…

…The silent man comes down
All dressed in radiant colors
You see it for yourself
To demonstrate my love for you
You I thought I was so in love
Some say it wasn’t true
Now that I’m older
Now, now that I’m older…

Listening tips
This song has the quality of of a prophet from Mars coming to Earth and attempting to bring us and his/herself back to right relations with the LORD.  Repent, for the kingdom of heaven has come near (Matthew 3:6).”

…I’ll talk but I know you won’t listen to me
Oh you wouldn’t say it but you wanted to
Don’t look, don’t walk away while I am speaking
I’ll take it, but I know it’s not for taking…

…Vesuvius
Are you a ghost
Or the symbols of light
Or a fantasy host?
In your breast
I carry the form
The heart of the Earth
And the weapons of warmth…
Vesuvius
Fire of fire
Follow me now
As I favor the ghost

Why does it have to be so hard?

Listening tips
This song feels like summer days when you know you can conquer the world.

Seems I got it wrong, I was chasing after something that was gone
To the black of night, now I know it’s not what I wanted at all
And you said something like, “All you want is all the world for yourself”
But all I want is the perfect love
Though I know it’s small, I want love for us all

And all I couldn’t sing, I would say it all, my life, to you
If I could get you at all
Trying to be something that I wasn’t at all

Heather and Josh can be counted as experts when it comes to Sufjan Stevens and Age of Adz.  Heather has exclusively, repetitively and compulsively listened to Age of Adz in her car/headphones/house for over a year.  Josh is Stevens’ #1 Internet stalker and was privileged enough to see Stevens’ perform Age of Adz live in Seattle in October 2010.  If you are interested in more information (if this can be possible) about Age of Adz or Sufjan Stevens please visit these resources….