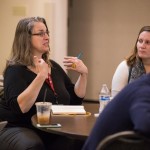 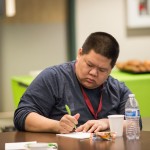 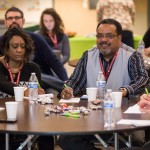 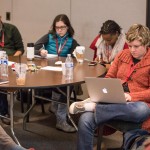 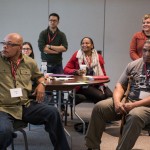 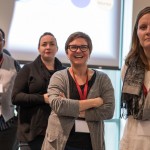 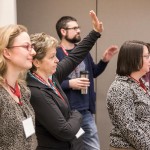 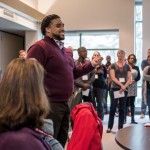 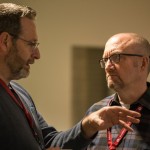 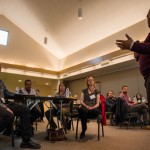 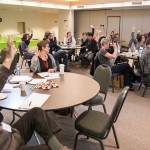 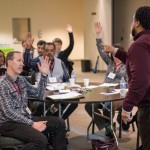 We seek belonging.  It is part of being human; it is part of why we tell stories.  And at the Free Methodist’s Pacific Northwest Conference Racial Reconciliation Summit, hosted at the Fine Center of First Free Methodist on Saturday, March 14, 2015 we learned how to listen more deeply to the stories we hear.  Led by Tali Hairston, Director of SPU’s John Perkins Center, the gathering of people from several churches and contexts allowed exploration of personal backgrounds as a way to engage and explore some of the filters that shape the story.  Understanding how we come to construct our stories is a powerful way to engage issues of race, among others, for the purpose of reconciliation.

John Perkins writes, “It is time for the whole church to take a whole gospel on a whole mission to the whole world….  It is time for us to prove that the purpose of the gospel is to reconcile alienated people to God and to each other across racial, cultural, social and economic barriers” (Beyond Charity, 18).  But we will not be able to build bridges if we’re not aware of the filters we otherwise subconsciously apply to stories we hear, as well as stories we tell.  Our stories are interactive; as Philip Sheldrake writes in Sacred Spaces, “Each person effectively reshapes a place by making his or her story a thread in the meaning of the place and also has to come to terms with the many layers of story that already exist in a given location.”  This iterative process forms both the environment and the individual within it.

Sheldrake says, “All human experience is narrative in the way we imaginatively reconstruct it…a socio-capital that is rich in myth and symbol.”  A story, Hairston explains, is like music.  It starts at home, adventures away and then brings us back, but when we come back after the journey, it’s a little different.  This is why we write stories.  We need stories to order and bring meaning to things.  We form ideas of our stories to pull disparate information together so as to make sense of our lives and it creates belonging.  But, Hairston teaches, “By hearing your story, I’m not hearing your story – your heart, personal thoughts or feelings – I’m hearing your environment’s story,” what it was like to grow up in the place, family and culture you did.  “Family” can be different based on how that was defined for you.

Furthermore, how we “imaginatively reconstruct” something is based first on what we previously had in our brain.  This is important to explore if the goal is to develop reconciling leaders that can reach across bridges without guilt, fear, lack of vocabulary and ignorance.  What we previously have in our brains that we use to interpret new events is based on filters and frameworks.  The five filters and frameworks that we analyzed in the forum are: Class/Money, Faith/Belief, System, Gender, Ethnicity/Race, and Education.  Whichever of these has the most weight, presence or “markers” for you is the one you will have the most language around.  And when your brain forms language around something, you become adept at noticing that thing everywhere and starting to see differences.  When you start to see it, it starts to matter.

For example, when race or gender comes up and people wonder why we are “still talking about that,” it’s because that particular framework does not have much weight in their brain; they rarely see it.  To be “successful” – to be in control of a space – we are taught that we must hold very tightly to whatever framework or filter is emphasized for us.  Conversely, adoptees, military and third-culture kids have to hold such filters loosely in order to be successful.  Culture says that the way to succeed as a “model minority” is to stifle who you are.  But Saint Paul becomes “all things to all people so that he might win some” – he will use none of these constructs – race, gender, class, education, faith or belief – to be successful.  Paul does not cover over Jesus’ Jewishness when he comes across the unknown god in Acts 17; he speaks into the current context a very Jewish Jesus.  It may be tempting to lessen or remove Jesus’ Jewishness, but it damages everyone when one group is stripped of its ethnicity.

And Jesus, an undeniably Jewish man, will not strip ethnicity away either.  What does Jesus do?  He invites the Samaritan Woman into shared space: “I will be as informed by you as you are by me.”  He says, “I must go through Samaria.”  Jesus wouldn’t go to Samaria if he was stepping on the Woman and trying to convert her.  The point is, for conversations to be welcoming and reconciling, both parties need to be well-versed and articulate about their own story surrounding race or gender for it to be a conversation between equals.  If a certain filter – race, gender, education, etc. – does not have a large presence in your life, you will not have developed language or vocabulary about it.  For example, white people may have a difficult time knowing where they come from (beyond vaguely Europe) because they don’t have to think about it; but this culture reminds people of color every day where they’re from and who they are.  Thus, the filter of race can have much presence in their lives.  These filters are increasingly divisive the more they are reinforced; in our entrenched divisions, we’ve become “conformed to this world rather than transformed by the renewing of our minds” (Romans 12:2) and have allowed our differences to impede reconciliation.

The training material stirred too many excellent questions to relay in this space but a central, if sometimes latent, common thread binding all parts of the discussion together was reconciliation.  Reconciliation is not the end in itself – the end is the kingdom.  Hairston said we don’t sit the auto mechanics down to watch us have a conversation about cars but we have done and continued to do this with people of color when we talk about race, or women when we talk about gender.  Reconciliation is partly about a recovery of self, a way to reclaim and become more conversant about one’s own identity.  “The Eucharist,” Philip Sheldrake writes in Urban Spirituality, “is the model;” and equality is when the person with power washes the feet of the powerless.  There is hardly a more hospitable act than this, especially in a day in age when people walked long, dusty distances in sandals.

Speaking of hospitality, too often, the church makes folks believe before they belong.  The world reverses the order, sometimes by offering the ability to belong contingent on things other than creed.  God says, through Christ, “I will make you belong, then you’ll believe.”  The Incarnation is that powerful.

And so we come back to belonging.  We often think of this as a feeling of “us-ness” and can be empowered by common or commonly defined enemies.  I am more likely to confer power to those who are in my “us” than those who are in the “them” group.  Ultimately, Paul blows the doors off the “us versus them” mentality, not by squashing the identity of others but by holding any such distinctions loosely and lesser than showing people to the heart of God.  Thus, Paul makes identity about something else entirely; if “there is neither Jew nor Greek, neither slave nor free neither male nor female, but all are one in Christ Jesus” (Galatians 3:28) then belonging is ultimately about unity in Christ.  And to that end, as Hairston asked to end the forum, “What will you hold loosely that you might win some?”