Segregation in the Church

Often labeled taboo, discussions concerning ethnicity rarely find acceptance in public or at the dinner table.  Most people carry the generally accepted premise that segregation is a past problem, solved and swept under a rug. However, a glance across the pews of most American churches portrays a strikingly different story. 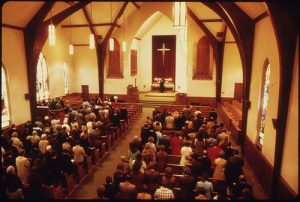 The article titled, “Race, Diversity, and Membership Duration in Religious Congregations” from Sociological Inquiry finds that 90% of America’s churches are segregated, defined as a single racial group composing at least 80% of the overall congregation and a quick glance at Sunday morning pews completely confirms the findings. The bigger question is why? With advances in diversity in many facets of American culture, it stands to reason that the American Church should soon follow.

Segregation, however, was not an early hallmark of the Church. A recent CNN blog post argues,

“The first Christian church was known for its diversity. Jews, Gentiles, and Greeks mingled alongside women and slaves. Biblical scholars have long maintained that the early church’s diversity was one of the reasons it became so popular.”

So then what must the Church accomplish in order to resemble the diverse community of its past?

“I’m hopeful that people would begin to recognize that a variety of approaches are needed to move toward dismantling oppressive or unjust power structures within the Church (and in the culture at large) that have for too long enabled, stratified, and upheld a status quo of segregation in American society.”

Understanding the issue as stated, the School of Theology seeks to resolve it by launching ethnic-specific ministries (like the Asian-American ministry program) and cultivating more multicultural communities through the Perkins Center or the new Reconciliation minor. Dr. Leong declares,

“We ourselves (in the SOT) are a plurality of stories and backgrounds, and we want to see that diversity cultivated, represented, and expressed in the students we serve, the churches in which they worship, and the larger world that is becoming more of a diverse, globalized, multicultural and multiethnic context every day,”

Just as the gospels present diverse views on the life of Jesus, it is imperative that people observe the diverse views of Christians in different cultures.

Considering the volatile nature of the subject, segregation often goes unmentioned and when addressed, it is often done through a one-size-fits-all lens. The School of Theology at SPU, however, acknowledges the deep roots of the issue and hopes to reconcile diverse cultures under the multicultural banner of Christ.