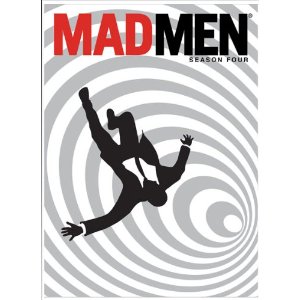 “The strongest principle of growth lies in the human choice.” — George Eliot

Self Help. Shelves upon shelves are dedicated to this topic in libraries and bookstores across America. Daytime talk shows hosted by professionals with large personalities and larger degrees find popularity by focusing on this subject. It is the magical panacea capable of granting health, wealth, and relational success. You make the difference in the world and you are weak if you request help.

Is another offshoot of Chicken Soup for the Soul capable of curing the turpitude of humanity? The AMC original series, Mad Men seems to think that a positive self-outlook lacks the features needed to cure an ailing individual.

Winner of four Golden Globes, Mad Men receives high praise from most critics. Best known for its dark portrayal of a 1960s advertising agency based on Madison Avenue in New York, the show’s narcissistic characters smoke, drink, and sleep their way to financial success.

Grab a Martini and Take a Seat

The show’s protagonist, Founding Partner and Creative Director Donald Draper (Jon Hamm), conceals a spiraling personal life. Marital strife leaves him alone in a New York City apartment; the pressures of a stressful work environment drive him to the bottle; and he seeks whatever pleasure he can find in the comfort of a woman’s touch.

Inevitably, his home life influences his professional life, which creates unwanted stagnancy. Sensing the moribund direction of his life, Draper implements self rules such as a limit of three drinks a day and a steady romantic relationship. For a short period, his newly structured life decreases his depraved tendencies. Both his personal and professional lives begin to flourish.

But, as with most addictive propensities, combating them alone typically results in failure. A myriad of detrimental circumstances pushes Draper’s life toward the brink.

Sometimes You Just Need a Friend 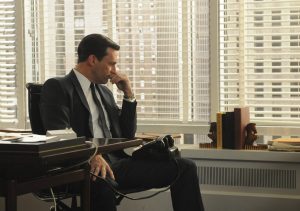 Mad Men evocatively depicts human frailty. Draper’s narcissism launches him to the peaks of the advertising world, leaving colleagues strewn in a path of wreckage. But the same selfish nature humbles him as his walls tumble around him.

In light of this portrayal, our businesses and vocations can also present opportunities for gain at the expense of others, occasions for living in excess, and chances to act as lone wolves. A community of friends and colleagues who have the opportunity to speak directly and truthfully into our lives makes a big difference. Lives lived without meaningful connection — similar to Don Draper’s — suffer similar solitary and deleterious results.

Don Draper’s character illustrates the fact that Christians and non-Christians alike are prone to self-deceit, and in turn, self-destruction. Our weaknesses and moral failings only become amplified when we combat them alone. Community, then, is a vital aspect of a functioning individual; it catches people when they fall, and it encourages people to act selflessly.

In a culture marked by individualistic philosophies espoused in self-help books and pull-yourself-up-by-your-bootstraps success stories, the power of community is a valuable asset. Mad Men reminds us of the perils existing in solitude.

Much Better Than a Self-Help Book

On the whole, Mad Men is a show of subtlety, unafraid to engage in the complex dilemmas of the unsettling 1960s era. Like a dense book, the show sometimes requires time for the themes to fully digest. Yet, when viewed as a whole, Mad Men is a masterfully produced show depicting the struggles of the business world. Although slow-paced (it’s worth it; I promise), I strongly recommend picking up and watching this season and previous seasons of Mad Men on DVD.