Telhu–A Foil to the Gospel 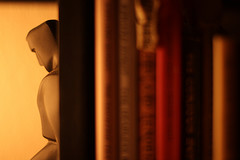 One thing that I have done, to keep my sanity throughout seminary is to read novels.  Thanks to a very good recommendation from Josh I just finished The Name of the Wind by Patrick Rothfuss, which can be described as a poetic Harry Potter meets The Lord of the Rings.  In The Name of the Wind there is a very interesting foil to the gospel.  I have always been a fan of the argument that the story of Jesus is true because it does not have the same elements as a fictional story. No Jewish man in his right mind would have women be witnesses to Christ’s resurrection as women were not seen to give credible testimonies.

Anyway in The Name of the Wind the main character Kvothe (orphan, adventurer, and future magician-hero) hears a story from a Thelin priest, Trapis, who runs a home for street children and the disabled.  The story is about Tehlu, who is god, and how he came to walk among humanity.  Trapis starts the story out by explaining:

It was a bad time in the world.  People were hungry and sick.  There were famines and great plagues.  There were many wars and other bad things in this time, because there was no one to stop them. 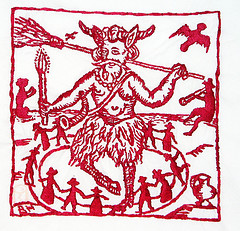 Even more terrible than the famines and plagues, were the demons, some of whom just bothered horses or spoiled food, while others hid in the bodies of humans.  There was one demon in particular, Encanis, who was the worst of the demons.  Tehlu, creator, lord, and watcher of the human world, was upset because of the demons. While Tehlu saved the few who were worthy something more drastic needed to be done.

After years of watching and waiting, Tehlu saw a woman pure of heart and spirit.  Her name was Perial.  Her mother had raised her to know Tehlu and she worshiped him as well as her poor circumstances allowed.  Although her own life was hard, Perial prayed only for others, and never for herself.

Seeing that Perial was holy, Telhu visited her in a dream.  In the dream Perial asks Telhu a very important question “What can you expect of people when demons are their neighbors?”  Telhu responds that humanity was wicked and that wickedness must be punished.  In response Perial boldly states that Telhu knows very little about what it is like to be human.  After the dream Perial discovers that she is pregnant, in three months she had a baby boy, which she named Menda.  In two months Menda had grown from a baby to a young man appearing to be 17 years old.  As the town comes to investigate Perial’s strange circumstances Menda makes an announcement.

I am not Menda, though that is what my mother called me.  I am Tehlu, lord above all.  I have come to free you from demons and the wickedness of your own hearts.  I am Tehlu, son of myself.  Let the wicked hear my voice and tremble. 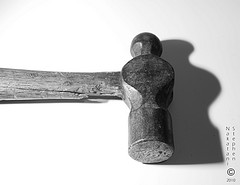 Tehlu then draws a line in the dirt and makes the town choose if they want to be on his side of the line or not.  Crossing over leads to pain and punishment for now, while refusing to cross to Tehlu leads to death.  When the first townperson, Rengen, crosses Tehlu hits him three times with a hammer, gives Rengen the name Wereth, and embraces him to remove most, but not all of the pain.  Tehlu continues this with the town, hitting people with hammers and hugging them, in the process he drives out demons from individuals and converts the majority of the township.  Everyone gets hit with the hammer, but only those who cross over to Telhu are embraced.  Then Tehlu continues the pattern among many towns for seven years all the while hunting for Encanis.

Finally Encantis is the last demon roaming the earth.  Tehlu after many days of chasing catches up with 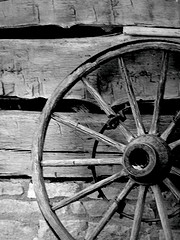 Encantis and hits him with the hammer.  Encantis is not yet dead, but incapacitated due to the iron in the hammer.  Tehlu builds a prison of an iron wheel for Encantis and while Encantis is bound to the terrible iron wheel Tehlu gives him the choice to cross over.  When Encantis refuses, Tehlu throws him, still attached to the wheel into a fiery pit.  But Encantis begins to get loose, leading Tehlu to jump into the pit himself and hold Encantis down.

So Tehlu held [Encantis] to the burning wheel, and none of the demon’s threats or screaming moved him in the least part of an inch.  Sot it was that Encantis passed from the world, and whith him when Tehlu who was Menda.  Both of them burned to ash in the pit of Atur.  That is why the Tehlin priests wear robes of ashen grey.  And that is how we know Telhu cares for us, and watches us and keeps us safe…

It is in reading a fictionalized gospel that makes me grateful that Jesus is a God of reconciliation and mercy rather than one focused only on justice.  I am glad that in Jesus died to forgive our sins not to punish them.  That Christ died not by killing the devil, but in sacrificing himself for humanity the hold of evil has been removed from us.  It is wonderful to be a part of a tradition with a robust theology of the incarnation, the humanity of Jesus, and the Trinity.  Lastly Christ did not leave us in death, but bestowed upon us the Holy Spirit, the Church, and a escahtological hope.  These are things to be grateful for.