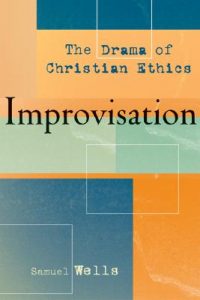 The single most influential book in my time at Seattle Pacific Seminary so far has been one that I would never have expected. It taught me a new language for my faith. And though I don’t use that language that often, the same language also offered me a new way of looking at the world and the Church.

When I thought of seminary and life-changing books and theologians, I first thought of all the magna opera that we expect to read, the staples of a theological education, like Augustine’s City of God, or Aquinas’ Summa Theologiae, or Julian of Norwich’s Revelations of Divine Love. Really, it’s half the legendary status that is attributed to these church fathers and mothers that makes them seem like the ones that will blow our minds like it has for thousands of people through the millennia. Yes, these ones are influential for a reason. They all have beautiful and good and helpful things to say for and to the Church.

Which is why I didn’t really expect this one to be the one. It’s got a strange title by a guy that I hadn’t heard of before. Improvisation: The Drama of Christian Ethics? Samuel Wells? Also, he has a genial, rounded face with big round eyes that remind me of a caricature of a hobbit from the Peter Jackson movies, although I didn’t know that until I found a picture of him online for this post. Don’t you agree? I have to admit that I’m generally not too well-read, and so I didn’t know at first that Samuel Wells has a Ph.D in Christian Ethics and is currently the dean of Duke University Chapel. He works with Stanley Hauerwas too, which is pretty cool.

For someone who is a terrible actor, and who can’t imagine adding improvising to the task of performing drama in front of people, this book came as quite a surprise to me. We read it in our first year, Spring quarter, for Dr. Koskela’s Theology and Ethics course, “The Holy Spirit and the Global Church.” And it helped me a lot in finding a very extensive and well-applied analogy for the way the Church is to find identity and move and live in the world today. It was a new, clear and fresh language for my faith, in a time when most people are complaining about the woes of postmodernism and how it makes it so that no one quite knows who they are, how to develop identity or how to find any solid ground. And when I say new language, I mean it: jokingly, my classmates and I started using these terms we found in the book to the point where it did become ridiculous. We were able to do this not only because my class is full of funny people, but also because they just made so much sense.

Status, accepting, blocking, givens, gifts, overaccepting, reincorporating…it’s all the language of the discipline of improvisation. But you’d be shocked upon reading this how well it fits with Christian ethics here and now.

Wells knows ethics, and he sees it as far more of a practical thing than a theoretical thing. Who’s to really say that they know exactly what they would do or say when the Nazis come knocking on their door to find Jews hiding in houses, before it actually happens? All these hypotheticals aren’t quite as helpful as we would hope. But what is helpful, Wells argues, is a modification of virtue ethics, based upon a community as a whole instead of the individual, inspired by the Christian story. The people of God are formed in practicing the story, acting it out together. And then they can feel confident to improvise in the wild, wide world. It’s not about being able to predict or prescribe. It’s about becoming the people that will be able to act rightly as the crises arise, to act as Christ would in the world and have a pitch-perfect place in the Christian story today.

I’d highly recommend this book to anyone – though it’s a little dense, it’s not nearly as dense as Augustine or Aquinas. I’m in a book group with a few people from my church, and we’re studying it right now. Such good and wonderful conversations around how to live today! There’s far more I could say about this book, but maybe some of my fellow classmates can articulate things better in the comments, or you can respond with your own curious questions.