It’s an understandable mistake – but it’s still a mistake.  It’s an evocative devotional image and a suggestive theological idea – but it’s based on a linguistic faux pas nonetheless.  It’s a mistake I have heard several colleagues make in lunchroom conversations, and it’s one that I myself used to make in my own lectures, until I learned better a few years ago.  Since my “enlightenment,” I have occasionally harrumphed about this mistake in several of my classes, warning students not to peddle it publicly in their sermons.  But now that I have found even the venerable and beloved Eugene Peterson guilty of it – and now that I have this blog in constant need of fresh material – I must speak out.

The mistake made by Peterson, along with so many other contemporary Christians, is to imagine the relations of the three Persons of the Holy Trinity as a kind of dance.  The evidence given for this image is that the word used in Patristic theology for these relations is perichōrēsis, which is supposed to refer to a kind of intricate ballet.  Peterson writes:

The dance is perichoresis, the Greek word for dance.  The term was used by our Greek theologian ancestors as a metaphor to refer to the Trinity.  Perichoresis, wrote Karl Barth, ‘asserts that the divine modes of existence condition and permeate one another mutually with such perfection, that one is as invariably in the other two as the other two are in the one.’  Imagine a folk dance, a round dance, with three partners in each set.  The music starts up and the partners holding hand begin moving in a circle.  On signal from the caller, they release hands, change partners, and weave in and out, swinging first one and then another.  The tempo increases, the partners move more swiftly with and between and among one another, swinging and twirling, embracing and releasing, holding on and letting go.  But there is no confusion, every movement is cleanly coordinated in precise rhythms…, as each person maintains his or her identity.  To the onlooker, the movements are so swift it is impossible at times to distinguish one person from another; the steps are so intricate that it is difficult to anticipate the actual configurations as they appear.[1]

The loveliness of the image and the eloquence of Peterson’s prose are undeniable.  But they are based on a lexical bungle.  There is nothing in the New Testament or in Patristic theology to suggest that the three Persons of the Holy Trinity are dancing!  Let’s get the facts straight.

So here’s the problem: People who love the idea of the image of the Father, the Son and the Holy Spirit engaged in an eternal dance, and who have read that Patristic theologians described the relations of the three Persons as a perichōrēsis, assume that the latter word is formed from peri and chŏreuō.  But this is simply wrong.  Later Byzantine theologians, though not the early Church Fathers, did describe the relations of the three Persons as a perichōrēsis.  But this word is actually a compound of peri and chōreō, and refers to a circular rotation, a mutual giving-way, an interchange, an interpenetration.[3]  It implies that each Person of the Trinity eternally honors, respects and defers to the other two, that each, though in one sense divinely self-subsistent, nevertheless “loves” the other two into being, so to speak, and is in turn “loved” into being by them.  One may imagine, perhaps, that there is something “dancelike” in this solemn reciprocity and festive interchange – but it is not because the word perichōrēsis has anything to do with choreography.  The verbal similarity is purely accidental. The confusion among English speakers is due largely to the fact that two different Greek vowels, omicron (“short o”) and omega (“long o”), are both rendered with the same English letter, and that the dipthong eu in the verb chŏreuō drops out when the stem of the verb is turned into the noun chŏrŏs (dance, choir, chorus).

I learned all this about fifteen years ago when I read God in Patristic Thought by the great English scholar, G. L. Prestige.[4]  Apparently the word perichōrēsis goes back to the ancient Greek philosopher Anaxagoras (c. 510–428 BC), who used the word to refer to the apparently circular motions of the stars in the night sky.  A thousand years or so later, the Christian writer, Leontius of Byzantium (c. 485–c. 543) (or perhaps one of his glossators) used the related word, antiperichōreō, in a Christological context.  There it referred to the “interchangeability” of the divine and human natures of Jesus.  A century after that, Maximus the Confessor (c. 580–662) used the word perichōrēsis, again in reference to the two natures of Christ, or more precisely, to the activities appropriate to each nature.  These “proper” activities are distinguishable but not divisible.  Does a red-hot knife burn…or cut?  Well, it does both – simultaneously and inseparably, just as the incarnate Christ acts both as God and as man.  Each of Jesus’ actions expresses both of his natures: his characteristically “human” actions, such as weeping, are performed in a distinctively “divine” way, with salvific intent; and his characteristically “divine” actions (such as the raising of Lazarus) are performed in a distinctively “human” way (with deep emotion).  For Maximus, the term seems to mean “reaching out” or “going forward,” as if each nature, or its characteristic mode of operation, were gesturing in the direction of the other.  It is not until we come to John of Damascus (c. 675–749) that perichōrēsis is first used in reference to the three Persons of the Blessed Trinity.  John speaks of mutual indwelling or co-inherence of the Three Divine Persons.  Each fully interpenetrates the other two, without being diminished, altered or amalgamated by the union of love.

No one has captured the Trinitarian sense of perichōrēsis given it by the Damascene – the sense that has dominated Christian theology ever since – better than the Russian painter, Andrei Rublev (c. 1360–c. 1430).  In his famous icon, Old Testament Trinity, Rublev represents the three divine Persons as the three angels who visit Abraham and Sarah by the oaks of Mamre (Gen. 18:1–15).[5]  In the biblical story, the aged couple show their guests hospitality, washing their feet and offering them a meal.  In Rublev’s rendering, the hosts are not shown at all, but the hut in the upper left corner, the tree in the upper right, the dinner table in the center, and the bare feet of the figures at the left and right are subtle reminders of the story’s setting. 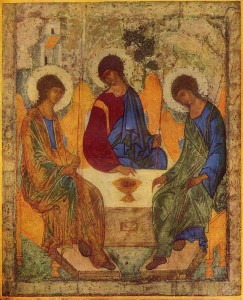 But what Rublev does here is to turn a theophany story into a pictorial meditation on the relations of the three persons of the Holy Trinity.  He depicts the haloed faces of the three angels identically – for they all equally share the divine nature.  He has their wings touch and overlap, but keeps their bodies separate – to signify both the distinctness of their respective identities and the unity of their fellowship.  He shows their heads bowed reverently toward each other – for each demonstrates his distinctive personhood by honoring the other two.  He gives the figure to the left a shimmering golden robe, representing the Father’s supreme authority; he clothes the figure in the middle in a brown robe, signifying the Son’s earthly humility; and he shows the figure to the right in a green robe, symbolizing the Spirit’s office as “the Lord, the giver of Life.”  In this great icon, the color palette, the composition of the scene, and the facial expressions, bodily postures, hand gestures and costuming of the figures are all meant to express the threeness of the Divine One, and the oneness of the Holy Three.  They dine eucharistically in a perfect fellowship of eternal, reciprocal love.  But they are not dancing.

[1] Eugene H. Peterson, Christ Plays in Ten Thousand Places: A Conversation in Spiritual Theology (Grand Rapids, MI: Eerdmans Publishing Co., 2005), 44f. The citation is from Karl Barth, Church Dogmatics I/1 (Edinburgh: T&T Clark, 1936), 425. Peterson acknowledges that “Perichoresis is not a New Testament word and not all theologians today accept is appropriateness as an image for Trinity. He also notes that Catherine LaCugna, who very much likes the image of the divine dance, recognizes that “the philological warrant for this is scant…” (344f, n15). But as we shall see, the philological evidence is not scant. It is nil.

[2] For the hyper-persnickety, the two verbs just given mean “I dance” and “I make room,” respectively. Dictionaries usually show the first person singular active indicative form of Greek verbs, whereas English verbs are conventionally given as infinitives.